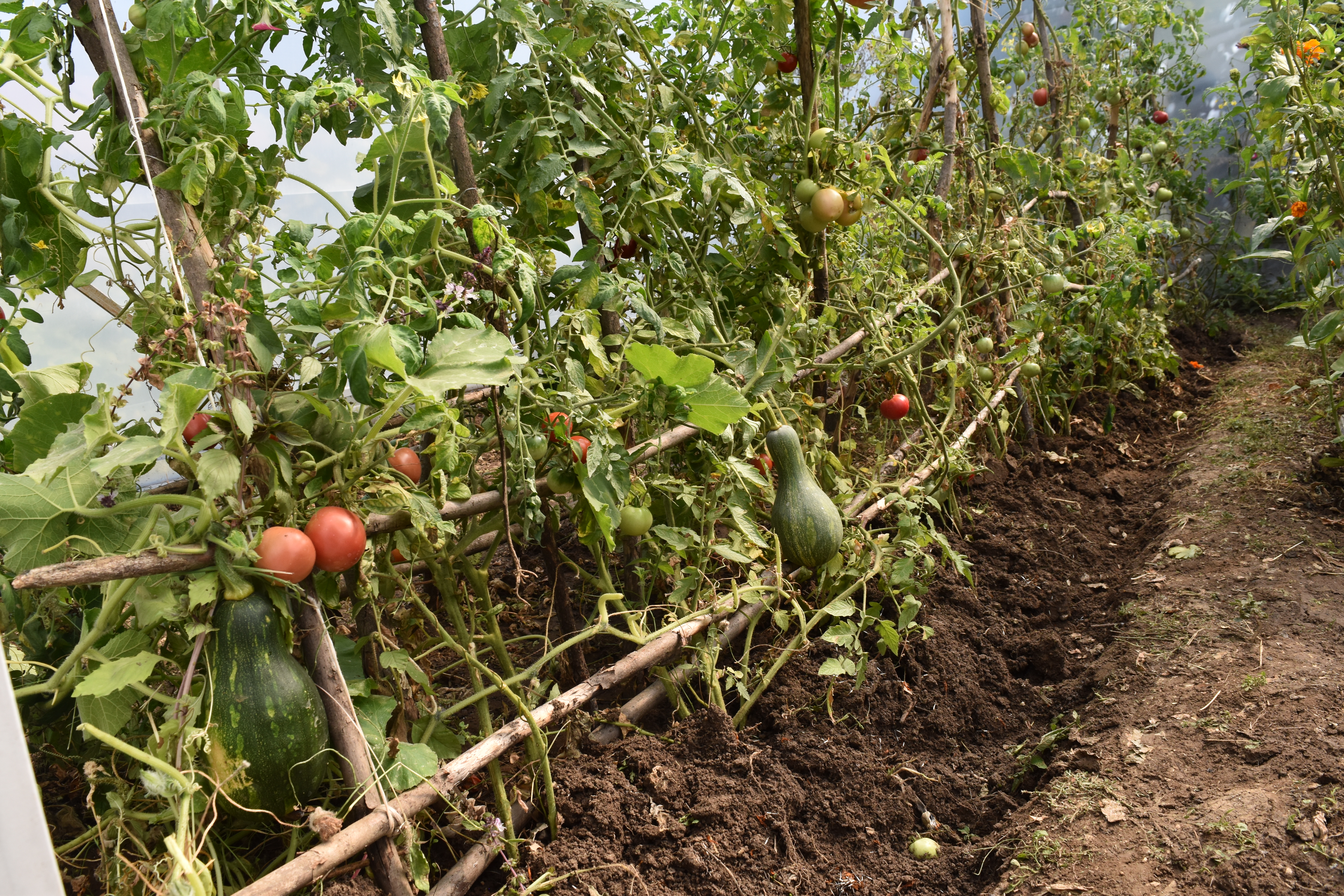 Right before a team from Armenia Tree Project (ATP) and Green Lane NGO departed from Yerevan last week to visit Artsakh and check in on the Artsakh Greenhouse Program, Armenia was once again under attack.  Though our teams were considering not taking the trip due to the conditions, they were happy to hear that Artsakh was safe for the time being, and decided to continue with their plans to visit the beneficiaries of the ATP Artsakh Greenhouse Program.

In addition of regular checkups, our greenhouse beneficiary families from Askeran and Martuni regions, including the Shushi Technological University and the Martuni Vocational School would receive training and seeds for planting at the end of September.

We arrived in Stepanakert early Monday morning on September 26th and were pleasantly surprised to see the city so active, particularly after the panic in Armenia over recent attacks on its sovereign territory. We saw the streets of Stepanakert bustling with people rushing to work, joyful schoolchildren, small businesses changing their open-close signs, and tatik (grandmas) –papiks (grandads) sitting on benches with a bag of freshly baked bread and enjoying bulochkis (sweet bread).

Our team became charged with this positive energy and went on our way to work. Our first stop was the Shushi Technological University’s greenhouse, which has been relocated to Stepanakert. There, we met students and lecturers from the faculty of agronomy, accompanied by the chancellor. After receiving detailed instructions, the entire group went into action by planting the plants and seeds which we had provided.

Our partner, Green Lane NGO introduced new varieties of high-value crops, such as strawberry, goji berry, blueberry, as well as greens, herbs, and flowers, which are easily grown not only in the greenhouse but also in an open field. Some of the greens and herbs provided include oregano, lemon balm, sage, asparagus, rosemary, chives, stevia, as well as different varieties of mints: English, apple, and chocolate. Besides the crops and detailed instructions, the beneficiaries were provided with tools including thermometers, watering cans, fertilizers, educational materials, and guidebooks.

In addition, they were introduced to the medicinal value of some of the plants, such as stevia, which can be used as sugar substitute or goji berry, which has numerous health benefits, such as enhancing blood cell formation and improvement of immunity. Moreover, herbs such as basil, thyme and rosemary can be grown earlier and later in the year in the greenhouse, and there is a consistent demand for it. They can also be kept in the greenhouse as mother plants then propagated in late winter to sell as container plants.

Next on our schedule were the villages of Herher, Karmir Shuka and  Taghavard in the heroic Region of Martuni, and the Vocational School named after Vladik Khachatran. On the way to the Vocational School located in the town of Martuni on September 27th, we stopped by the cultural center. In memory of the martyrs of the 2020 Artsakh War, which had begun on that day exactly two years ago, a large group had gathered around Monte Melkonian’s statue to hold a moment of silence. After the memorial, whilst the crowd went to the cinema to watch a movie about Garegin Nzhdeh, our team headed to the Martuni Vocational School.

In the schoolyard, in addition to the small greenhouse provided by ATP, the school had undertaken assembling another greenhouse. In an interview with Artak Sargsyan, the director of the vocational school, we learnt that for the past two years they have been fully immersed into renovating the school, because several buildings were severely damaged during the war.

“These greenhouses are new addition to our School. I always tell people that we can’t change our lifestyle without having it change us in some way. I want this greenhouse to not only serve as a demonstrative site for students and specialists in the field but also to develop into an efficient operation that will optimize plant growth and expedite harvesting and sales. On this note, I think growing high-yield cut flowers will be the best choice; firstly, since they are in high demand, and secondly, we will significantly reduce the volumes which are imported from other countries”, said Mr. Sargsyan. For greenhouse operations, Mr. Sargsyan added that the school has hired an agronomist who will frequently tend to the plants

In Herher, Karmir Shuka, and Taghavard Villages of Martuni Region we met our beneficiaries who shared their previous experiences in growing vegetables and asked us for clear instructions on how to deal with each type of plant we have provided to them. On a positive note, many of the families had achieved good results by harvesting several times since midsummer, while others had loosened the soil in the greenhouse and were waiting for further instructions and guidance to plant for the first time. In Herher Village, our backyard nursery owner Baghishyan Armine showed us her neatly put-together greenhouse full of vegetables. We learned from Armine that her husband died during the war in 2020, something which she has been struggling to cope with. She then switched the conversation to the greenhouse and hurriedly placed glass jars on the table which contained pickled cucumbers and tomatoes. She told us that all the vegetables were harvested from the greenhouse this year. She told us that her husband served in the army for over 25 years and was also one of the freedom fighters during the first war in Artsakh. After retirement, he only managed to work as the village administrator for a year. When the war broke again, like many men in the village he voluntarily joined the troops to defend the borders of Machkalashen Village, located not far from Herher. Currently Armine lives with her mother-in-law, her grandmother Anzhela, her daughter, and her son, Levon, who has chosen to follow in his father’s footsteps and serves in the armed forces.

Our last stop was in Askeran Region, where, accompanied by the deputy of regional administration Karen Aghajanyan, we visited the Backyard greenhouse families in Khramort and Khnapat Villages. In both villages, the situation is precarious, since the adversary side still holds control over some strategic heights nearby the villages. Despite this, many of the residents continue to send their children to school and kindergarten. Our delegation was awestricken to witness the strong will of the heroic inhabitants of Khramort who were helping their fellow villagers renovate the roof of their house located only a few kilometers away from Azerbaijan.

We were inspired by witnessing the resilience of the people of Artsakh.  Despite the instability in the region, there is a sense of calm in the villages and a determination in the people to live productive lives.  Our beneficiaries’ hard work over the past months is evident in their eagerness to continue to produce crops to feed their families and earn income.

Since 1994, ATP has been using trees to improve the standard of living in Armenia and Artsakh, focusing on aiding those with the fewest resources. If you would like to support ATP”s backyard greenhouse program please visit www.ArmeniaTreeProject.org/en/donation and note ‘Artsakh Projects’ in the Comment Box.

Armenia Tree Project, established in 1994, is a non-profit organization that revitalizes Armenia’s and Artsakh’s most vulnerable communities through tree-planting initiatives and provides socio-economic support and growth. It is based in Yerevan, Armenia, and has an office in Woburn, Massachusetts. For more information, please visit ArmeniaTree.org