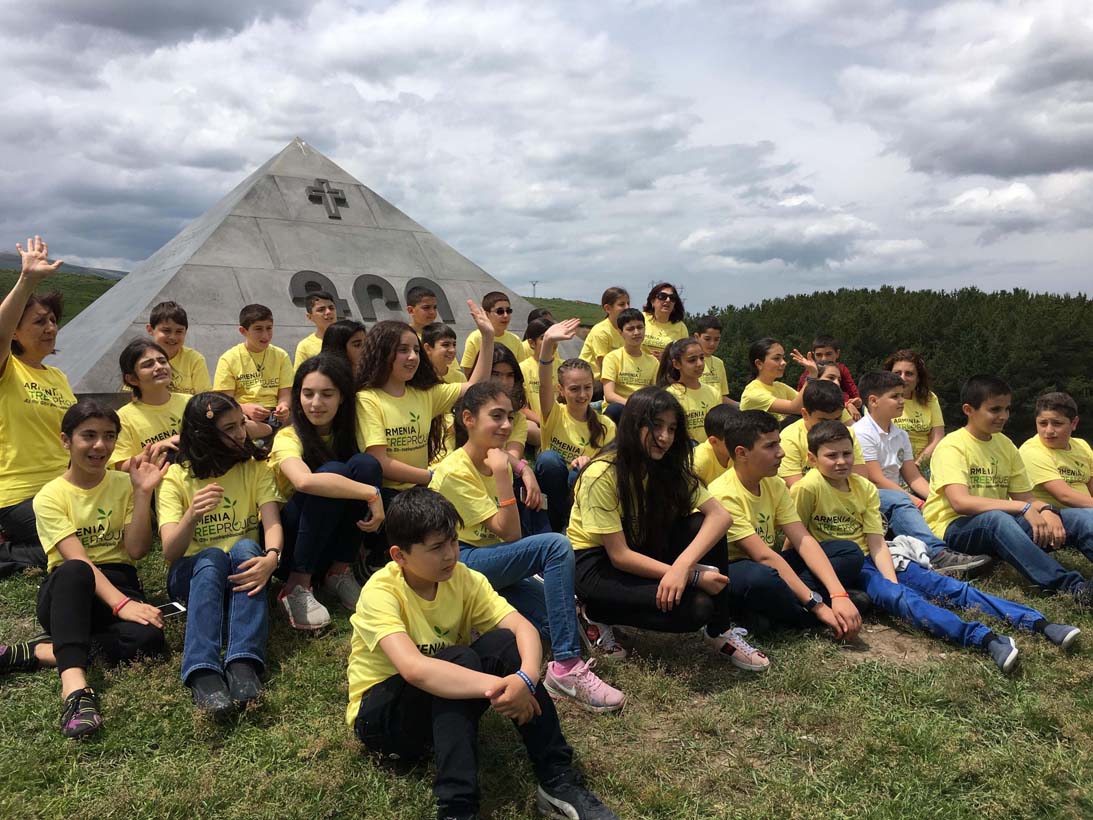 Malatia-Sebastia, colloquially known as Bangladesh, is one of the most densely populated districts of Yerevan. Although Armenia Tree Project (ATP) has helped transform the landscape by greening various community sites and six parks there, the district is comparatively dry. Ask any Bangladeshtsi and they’ll tell you they live in the Sahara. One of the most loved parks in the district, where ATP has planted trees, is named after General Andranik. A statue of him and his green army of trees welcome all visitors. It is a favorite spot especially for “babigs” and “dadigs” who enjoy rounds of backgammon in the shade and strolling with their grandkids.

Another landmark which has brought new life and the sense of a new era to the district is the Khoren and Shooshanig Avedisian School which was founded by the Armenian Missionary Association of America. With funding from Edward and Pamela Avedisian, the building opened in 2014 and became the first LEED certified school in Armenia and the Caucasus. The campus, which is equipped with sports facilities, innovative labs, a community center and green roofs, stands out almost like a beacon in a crowd of Soviet era buildings.

ATP’s Environmental Education program was brought to the students of the School starting in 2007. With classes on various environmental topics, workshops, nursery visits and seminars for teachers, ATP and Avedisian School have formed a strong partnership over the years. Starting in 2017, Avedisian School has been paired with St. Stephen’s Armenian Elementary School of Watertown, MA as part of the ATP’s Building Bridges program.

“The Avedisian School takes the approach of providing a Holistic Education for its students and we are especially pleased that ATP has selected and is joining us in providing more than just ‘reading, writing, and arithmetic,’ for our students in order to have them best prepared for the challenges of today and the future,” stated Mr. Avedisian.

The goal of Building Bridges is to connect Diaspora students with their environmental and cultural heritage and with their counterparts in Armenia. ATP reaches out to schools like Avedisian and St. Stephen’s to help make strong connections and works with the administration, parents and students to implement environmental education in the participating schools.

For the past two summers, the 5th graders of St. Stephen’s have been paired with the 6th graders of Avedisian School for their trip to Armenia. The students spend an afternoon together, usually learning about Armenia’s trees and eventually planting them. They pay a visit to ATP’s Michael and Virginia Ohanian Center for Environmental Education and tour the tree nursery in Karin village.

In 2018 the St. Stephen’s group was given a tour of Valdivian School and, after a round of introductions and a game of chess, the children planted trees together in Bash Aparan, as part of the plantings dedicated to the 100th anniversary of the historic battle.

“I can usually tell they’re interested by the flood of questions they ask,” said Nvard Gevorgyan, ATP’s Environmental Education Trainer. “Certainly, they’re curious about the planting process and forests in Armenia but what excites them the most is finding out the interests of their peers who live on the other side of the planet.”
ATP gives them a chance to do just that. Prior to meeting, the students are given time to get to know one another online via video conference calls. To narrow the gap of cultural differences and establish long-lasting bonds, ATP includes various icebreaking games and activities in the program for the children during their short stay. At the end of the day the students exchange contact information and promise to keep in touch.

“The students always get super excited before meeting the visiting School and it’s a great motivator for them throughout the year,” said Christine Gevorgyan who teaches Geography at Avedisian School and works with the School’s environmental programs. “The atmosphere is always very warm and positive with these groups. Some of the students from last year actually met up in the evening in Yerevan to spend more time together. They’re still in touch!”