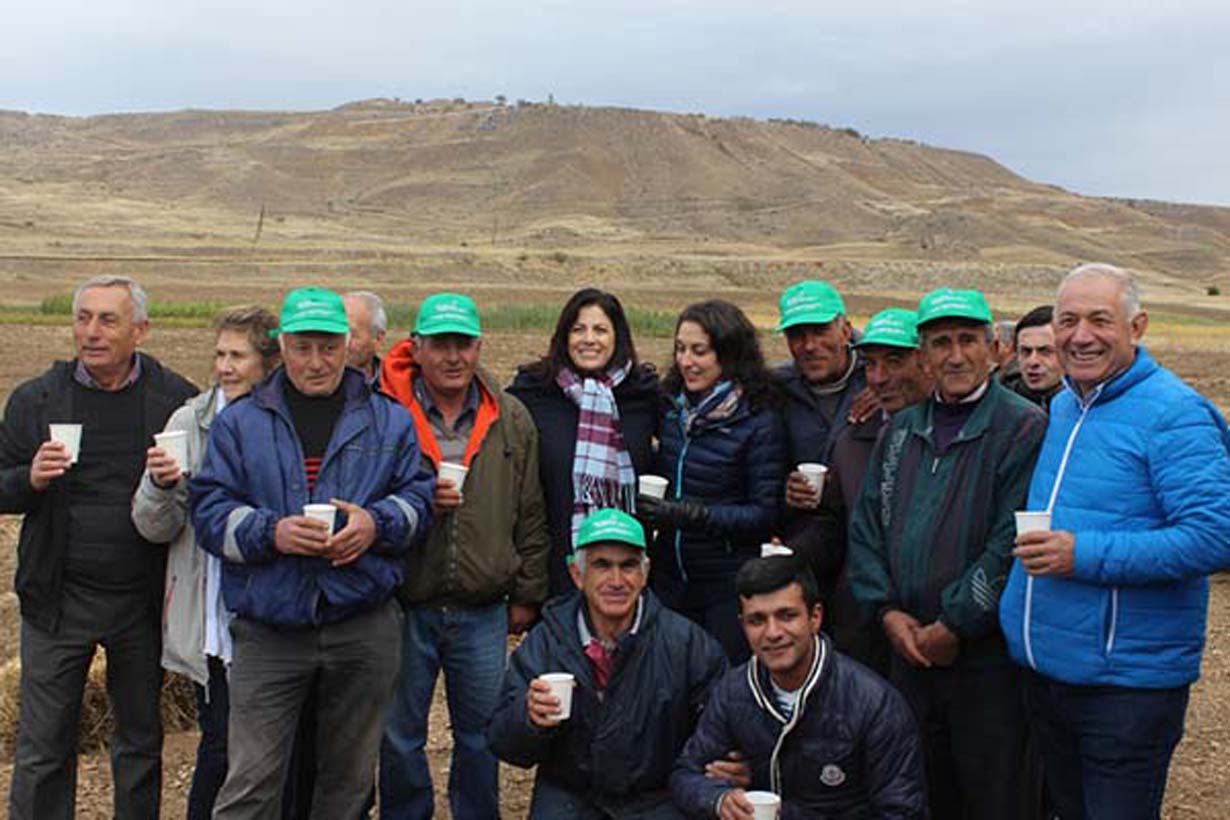 CHIVA, Vayots Dzor--Visitors to Armenia’s wine region may have noticed new activity along the roadside when passing through the small town of Chiva as they travel south from Yerevan. Armenia Tree Project (ATP) put this town on the map by launching its fourth nursery there on October 26.
For years, ATP has operated nurseries in the villages of Karin, Khachpar and Margahovit, which provide much-needed employment and provide thousands of tree seedlings to be planted every spring and fall. The nurseries serve as field research centers for state-of-the-art tree propagation, grafting techniques, irrigation methodologies and provide environmental education for students, professionals and local farmers. Now, ATP is expanding its reach southward, to the Vayots Dzor region.
The Chiva groundbreaking was well-attended by local guests and visitors from abroad. The opening ceremony was led by Ter Sahak Martirosyan, a vibrant local priest who has collaborated with ATP on other projects including tree planting around Noravank Monastery. Zorik Gharibian, founder of the renowned Zorah Wines, was also in attendance to “welcome ATP to the neighborhood.”
ATP executive committee members Julia Mirak Kew and Anthony Barsamian were also present, led by founder and chairperson Carolyn Mugar. Other special guests included Vayots Dzor Deputy Governor Mels Harutyunyan, Chiva Mayor Nairi Sargsyan and Archbishop Abraham Mkrtchyan.
Executive Committee member Anthony Barsamian, speaking on behalf of ATP, explained that Carolyn Mugar was in Armenia in the days after the earthquake, and decided to start planting trees after seeing them being cut for fuel. “ATP is going to sow the seeds, water the soil and plant the trees that will bear fruit for your children…for all of our children,” he emphasized.
ATP’s Chiva Nursery is located in an area acknowledged as a cradle of winemaking in ancient accounts. The eighth century BC kings of Urartu referred to Armenia as “the land of the vineyards” and Assyrian armies marveled at its vast quantities of fruit trees and vines, according to a recent article published by Smithsonian.com.
In a cave just a few miles from the Chiva Nursery, archaeologists from UCLA and the Armenian Institute of Archeology and Ethnography unearthed evidence of the world’s oldest known winery, dated to be 6,000 years old. The region is undergoing a renaissance in winemaking with a host of companies breathing new life into the industry.
ATP’s Chiva Nursery was established to provide locally grown trees to planting locations in southern Armenia and Artsakh. “We have several planting sites in this region,” explained Country Director Lucineh Kassarjian, “but in order to ensure the highest survival rates, we decided to cultivate trees in a climate and elevation that will make the trees better adapted to local conditions.”
“We also selected this site in Vayots Dzor because it is the wine capital of Armenia,” she added. “We would like this nursery to be a destination for visitors, just as our nursery in Karin Village has become a popular spot for tourists.”
In addition to trees, ATP plans to plant and preserve many of the indigenous species of grapes growing in Armenia since ancient times. At the groundbreaking, ATP’s leadership team planted several symbolic vine seedlings including Areni, Geghani, Mskhali and White Arakseni.
The autumn day closed with a toast among the dozens of guests assembled on the new 10 acre nursery. “We lift a glass to everyone who has lived on this land until now,” said Carolyn Mugar, “and we know it will thrive well into the future.”
Armenia Tree Project has planted more than five million trees since its inception in 1994. The organization is the only major tree planting program in the country and in its 22 years has successfully established four nurseries, two environmental education centers and has greened community areas in every province of Armenia and Artsakh. In the process, ATP has provided employment for hundreds of people and provided vital resources to thousands of village residents. For more information, visit the website www.armeniatree.org.