What's the Connection Between Trees and Climate Change? 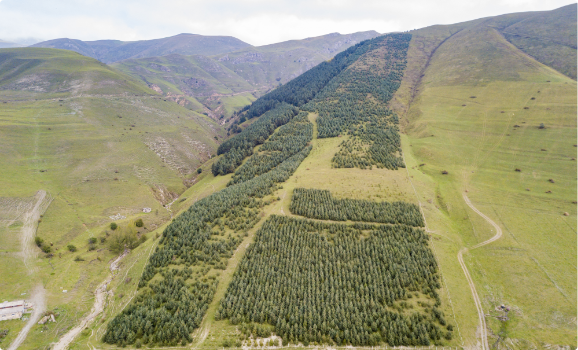 A group of scientists has declared that our planet's future climate is inextricably tied to the future of its forests.

The statement was released in October to coincide with the release by the prominent Intergovernmental Panel on Climate Change (IPCC) of a long-awaited report that paints a picture of what it would be like to live in a world that is 1.5°C warmer. This scenario is seen as highly likely, unless the world takes action to curb the emission of greenhouse gases including carbon dioxide. The report describes how rising seas, wildfires, and more extreme storms will be happening at a frequency and intensity that is higher than scientists previously predicted.

If it feels overwhelming, it doesn't have to. Many reports highlighted solutions we can implement immediately. The good news is that we already have some of the tools and technology to meet this challenge. One of them is trees!

Halting and reversing deforestation is critical for climate stability. Scientists say this alone could reduce the world's carbon emissions by up to 30 percent. Furthermore, forests and land offer the most cost-effective way to store more carbon right now.

Trees and other plants accumulate carbon in vegetation and soils as they grow, and protecting and restoring forests is one of the only proven technologies we have for pulling carbon out of the atmosphere at a scale that matters in the climate fight, wrote Belinda Morris and Frances Seymour of the David and Lucille Packard Foundation.

As a country with low carbon emissions, Armenia does not contribute to the global climate change problem. However, it will be affected by climate disruption including more extreme weather events such as hail storms, drought, and desertification. To prevent this, Armenia is making itself part of the solution by planting trees and making global commitments to increase its forest cover.

Minister of Nature Protection Erik Grigoryan pointed out at October's conference of the Green Climate Fund in the Republic of Korea that Armenia ranks fourth among the most climate-vulnerable countries in the Europe and Central Asia region. He also expressed Armenia's pledge to double Armenia’s forest cover by the year 2050. We are excited about this ambitious commitment to the Paris Agreement on climate change, and ATP intends to be a part of the effort in partnership with local, national, and international organizations.