For the Golden Autumns of the Future 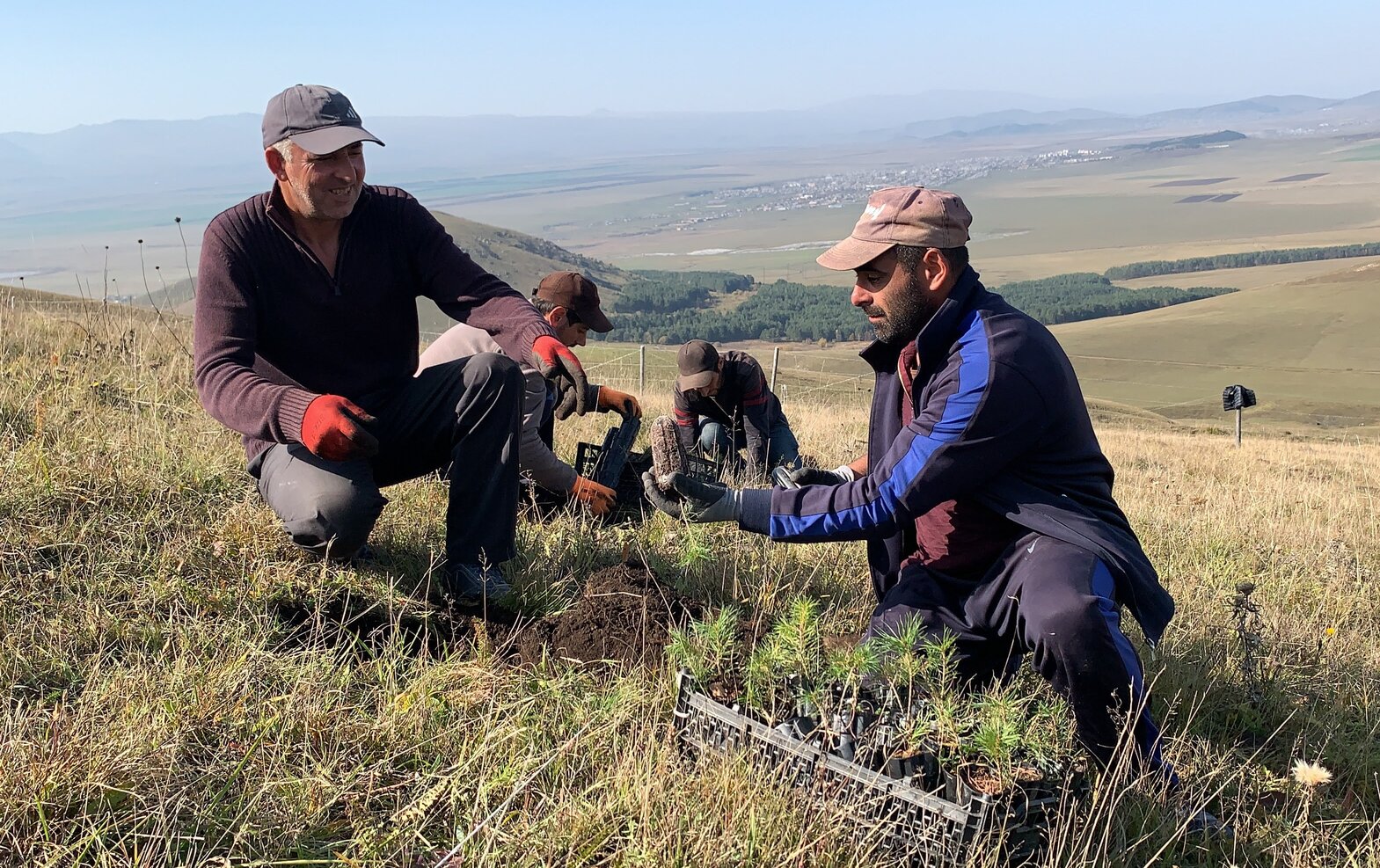 Tigran Sargsyan (right) returned home to Urut after 20 days of war in Artsakh and joined the forestry project to do his part before it was time to go back to the battlefield.

On the morning of October 27, the first thing I did, even before opening my eyes, was open Facebook on my phone to check for news. Many of us had the same ritual during the 45 days of war. The previous day, Azerbaijan had violated the third ceasefire agreement, this time brokered by the U.S. That morning, it had attacked Armenia’s southern border. The end of the war was nowhere in sight...but I had to be somewhere.

My colleagues and I were going to visit Urut village, one of ATP’s newest forestry sites in Lori, where fall plantings were underway. We were accompanied by an Armenian-American named Jackie Zacarian from Miami who was the first ATP supporter we had had the pleasure of hosting in months because of the pandemic.

On the road, we discussed current events, only taking breaks to express our awe at the beautiful golden fall that dressed the towns and villages we passed. Two and a half hours later, our car got off the paved road and started ascending a hill, and finally arrived at the planting location. The sun was shining, the sky was the bluest of blue, and there were people, young and old, swiftly planting trees.

We were given a warm welcome by our dear friends, including forestry specialist, Mkrtich Gevorgyan, and forestry monitor, Andranik Hovsepyan, who would be spending day-and-night for the next few weeks, along with forestry manager, Navasard Dadyan, directing ATP’s planting projects in the region. Mkrtich instructed Jackie, as she planted trees in Armenia for the first time. She was impressed with the workers’ agility, because planting was not as easy as it looked.

ATP had hired twenty members from the surrounding communities for the project in Urut. One of the women, a young school teacher from Tashir, told us that they were planting the forest for themselves and for future generations.  “School is out at the moment so high school students really enjoy coming here to work, just as I do. I think it’s really important for them to understand the value of a tree. It seems we’re planting more trees this year. Since the men are off to war and there’s the pandemic, income’s become even more scarce so this is a great opportunity for all.”

Soon after, we met a high school graduate among the workers who was waiting to get drafted. “I’m going to plant as many trees as I can until I’m called to serve my army. The more I plant the better it is for our community. We’ll make these barren hills beautiful with trees and help boost tourism around these parts.”

Tigran Sargsyan had just returned from 20 days of fighting in Artsakh. He had volunteered with 40 others from Urut and would be going back after a short break. Tigran kindly requested not to be asked about the war.  “I want to contribute to the making of this forest as long as I’m still here. I helped build the fence around the territory and now I’m planting trees. When I return from the war, I’ll go to the next planting in Bovadzor. Everything I do is for my wife and 3 sons, who can come pick apples here in the future”.

Rima Danielyan told us she and her father had been planting with ATP for three years. “Last year was different. This year… well, everyone’s nerves are on edge, but we work anyway. We’re glad to have a job to do. We’re waiting for peace, everything else we can deal with. Just let there be peace,” said Rima.

The same heavy feeling clouded everyone’s hearts, but at the same time, the warmth of the sun and the planting process itself kept hope for a peaceful and secure future alive in everyone.

Forestry specialist Mkrtich shared the vision for the planting project. “This territory, which is 16 hectares (39 acres) has been entrusted to us for the next 20-25 years for forestry purposes. At the age of about 10-12, once a canopy has formed, it will be considered as an actual forest. We’re planting about 3300 trees per hectare, and for the first time we’re using containerized plants for forestry. Types include pine, oak, ash, mountain ash, maple, birch, wild apple, wild pear trees and raspberry shrubs. There are deer living in adjacent areas, so we’re hopeful that fauna will develop here as the forest grows. It’s also going to help mitigate climate change in the area. “ After getting the fall planting underway, Mkrtich went to serve in Artsakh as a paramedic and has since safely returned.

The newly planted forest still looks like a barren hill, but it holds great potential. ATP has planted more than 390,000 trees this year- more than in any previous year - and provided 150 villagers with seasonal job opportunities. For Armenia, ATP is envisioning a green and healthy environment, one in which new generations of Armenians can feel immensely proud and strong for what their predecessors have sown and the benefits they have left behind to be reaped. The generation that preserves and enriches the environment secures the future of the land and its people.

About ten days after the trip, the planting troop had moved to work in the nearby community of Bovadzor, where more seasonal workers joined the project. Together, they had collected 190,000 AMD from their salaries to donate to Artsakh.

This war changed everything. Nature teaches us that with change comes a journey of healing and rebirth. We have a future to build and so we must keep going. Now more than ever we must focus our energies on strengthening Armenia’s security and the well-being of its people. #LetsGetToWork